During the long flight to Ind*a, I was struck with a thought, "What are we going to do with each other for 3 days?"  I admit I had some trepidation about how that would go.  We don't speak the same language and how much can you really do on the hotel grounds?  I was imagining after an hour or so, just staring at each other in boredom.  Wow, was I wrong!  Looking back it feels like the time we had together was only about 10 minutes long!  Not once did I ever feel like I didn't know what to do with her or wonder if she was bored.  I was never bored!!!  I have never been so mesmerized by a person in my life!  One thing about adopting an older child is that since they are pretty self- sufficient (compared to a baby) watching them do things and how they do them, is incredibly fascinating.  With that, I will start with how things went after we left the orphanage....

M. told me to bring a towel because many of the children get car sick since most of them have never ridden in a car.  Munni climbed right in, sat on my lap (don't judge me, this is India!), held onto the door handle and LOVED looking out the window at life.  We went to a hole in the wall restaurant for a traditional AP lunch.  One thing you should know about me is that I've traveled a bunch and my idea of traveling is never to find the "little America" inside whichever country I'm visiting.  My travel motto for sure is, "When in Rome, do as the Romans," so I was excited about this authentic meal!  M. ordered everything so I have no idea what it was I ate, but man was it amazing!!!  This was Munni's first time in a restaurant.  She just left the place she's known as home for the last 3 years with a white stranger and someone she has seen on occasion.  I thought to myself, "This could have potential for a real meltdown."  Something else you should know about me is that I worked in the restaurant business for 20+ years and have ALL kinds of "terrible kids in restaurant" stories.  Yes, your waiter/ess is talking about your child's behavior.  We all do.  With that said, I was very curious to see how she would act and wondering if I would be forever banished from the camaraderie of my fellow servers.  Well, Munni passed the test!  She was perfectly behaved!  I'm sure that a lot of that came from the shock, wonderment, or whatever you want to call the new experience.  She might be saving it all up for one grade A meltdown later.  Like on the plane.... 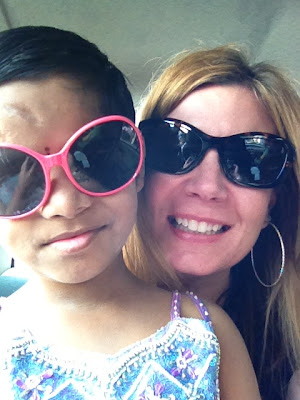 Anyway, it was interesting to watch her eat.  Sometimes she would use her fork, other times she would eat like a Mexican, tearing the Indian version of a tortilla off into pieces and dipping it into the different chutneys.  The Spanish teacher in me was proud :)  She LOVES spicy food!  She also knows what she doesn't like, which she displayed over the 3 days I had her.  I was happy to see this, that she just didn't eat everything handed to her or gorge herself as many children in orphanages do.  It was a sign to me that she is being well taken care of in her orphanage.  Then she did something really interesting.  She picked up the water bottle, held it about 6 inches above her head and I got a little nervous but M. told me to just watch.  Munni poured the water directly into her mouth and didn't spill one drop.  I don't think I could do that!  It was incredible to see her fine motor skills and hand eye coordination!  In the orphanage, they are not allowed to put their mouth on any shared item.  There are 300+ kiddos where she is so you can see they do everything they can to keep illnesses at bay. 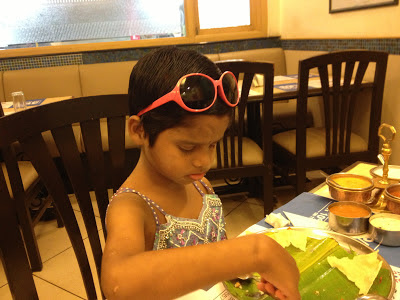 We left the restaurant and went back to the hotel.  As soon as we arrived, it was as if we were royalty.  Everyone came to us and were saying hi to Munni.  It did make me feel good that they were so nice to her.  She had her little pink sunglasses on as if she was used to the paparazzi :)  Then the hotel manager asked if she could have Munni for 5 minutes to show her around the pool.  I thought this was crazy!  I told her that I just got Munni and we were going to the room.  She was pretty insistent and said she would just have her for a little bit.  I told her we were just going to go to our room.  I told M. I couldn't believe she wouldn't take no for an answer!  M. agreed and thought she was too pushy.  We got to the room and I got some games out for her.  I showed her the Magnadoodle and she LOVED it!!  It was a huge hit!  We played for about 10-15 minutes.  I felt like she was comfortable with me, so I decided to give her the lice treatment.  I just started putting it on her when the doorbell rang.  I thought it was M. so I ran to the door and opened it.  It wasn't M.  It was the hotel manager.... and a rolling table with rose petals scattered all around a cake that said, "Dear Munni- welcome to the family!"  Ah!  The manager was stalling for time! No wonder she was being so pushy about showing Munni around the hotel!  They wheeled the table in and got a picture of Munni cutting the cake.  It was such a nice gesture and Munni loved it!! 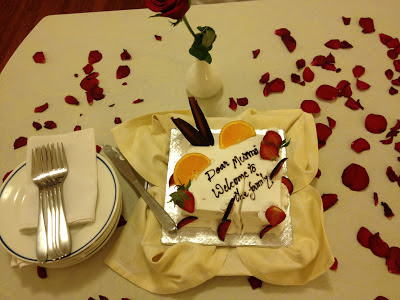 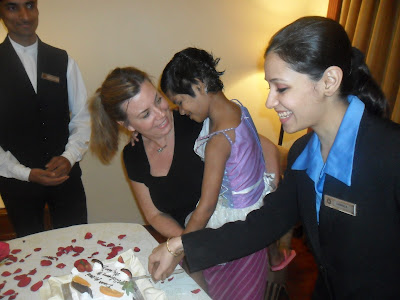 I had the lice treatment sitting on part of her head so I hurried them out so I could finish it.  One thing that really caught me off guard was a significant scar on her scalp.  Every picture I've seen of her was obviously from the front.  On the crown of her scalp is a burn scar the size of a grapefruit.  No hair grows there and since they keep her hair so short, it's really noticeable.  Again, I wasn't prepared for that and it brought up all kinds of rage inside me.  I really, really have to constantly pray and surrender this to the Lord and trust that somehow, justice will prevail.  Because when I see the scars on her that tell a very tragic and unjust story, I feel a lot like David when he prayed the imprecatory prayers against his enemies.  I'm just being honest.

We took a shower to clean her up and get the treatment out of her hair.  WOW did she LOVE the shower!!  I've heard that some kids are afraid but she loved it!  I brought one of net loofahs in bright pink.  We put some great smelling shower gel on it and I sudsed her up!  She was giggling and laughing the whole time.  She kept stomping her feet the way kids do in rain puddles and it was cracking my up:)  After the shower, I let her choose her jammies.  She loved the elephant ones and squealed when I put them on her.  It was adorable!  I let her have a piece of her cake and she was really happy. 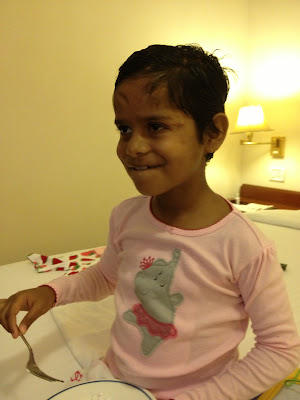 After that we skyped with my family.  Skype is seriously the BEST INVENTION EVER!!!  It was so great for them to be able to see her and for her to be able to see them!  Many tears of joy were shed :)))  After the skype calls, I brought out the puzzle my friends gave me.  She loved it! It was so fun for me to watch her figure it out, analyzing each piece. 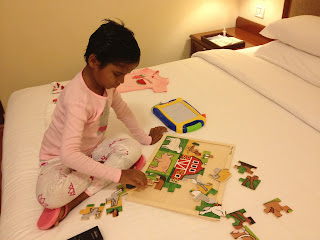 Finally, we went to bed :)  I can't even tell you how great it felt to be snuggling with my little girl!  I kept pinching myself because I couldn't believe it was real.  We said our prayers, giggled a bunch, and eventually nodded off into a very sweet dream land!