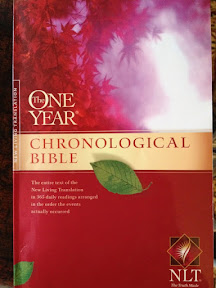 I got this for Christmas.  It's been great reading the Bible in chronological order BUT, spending so much time in the Old Testament, reading story after story, I've come to the conclusion that those people were jacked up!  It might be easy to think that society was more "moral" back then.  Nah, Baby, Nah!  What were they thinking?? The stories are told so matter-of-fact, with no emotional detail, that it makes them even more shocking.  I'm an extremely emotional person. Seriously. One time my best friend and I were standing in line at Starbuck's and she told me, "I got this."  I started crying.  SAP!!  So when these stories are just put out there, I'm dying for more information!!

For example, after the flood, Noah's daughters get him drunk, have sex with him, and get pregnant.  What the??  At what point would that ever be a good idea?  And what was their conversation before they did the deed?  "Hey sis, I have an idea...let's get dad drunk so we can get pregnant."  G to the ROSS!  The more I thought about this, because it was so disturbing, the more I came to the conclusion of how desperate they must have felt if this was the decision that seemed logical to them.  Remember, the Ark had just landed so they were freaking out about how they would have children.

And what about Jacob and Esau?  I've always been taught to think down on Esau for trading his birthright for a bowl of soup.  But, the more I've thought about this, the more I kinda feel sorry for him.  I mean, his mom helped his little brother trick their dad so that her favorite son (Jacob) would get the final blessing from dad.  How did that make Esau feel?

And Joseph.  Poor Joseph.  His brothers were so jealous that they faked his death and sold him into slavery.  Thanks guys.  It was many, many years and many, many tribulations later until he finally saw them again.  And forgave them.

One of my favorites is about Shadrach, Meshach and Abednego.  They were  3 young Jewish guys who refused to bow down to King Nebuchadnezzar's golden idol.  Their devotion to God caused them to be thrown into the fire.  Once they were in the fire though, they were just chillin', walking around, and not even the hair on their arms was singed.  However, the rope that had bound them was burned off.

All of these stories made me reflect on faith.  I heard a great sermon last weekend and he talked about delivering faith and sustaining faith.  Some of these stories show God's deliverance, while the others show God sustaining them THROUGH the trial.  I especially think about the fire.  I'm SURE they were begging God to deliver them from being thrown into the fire.  Who wants to be burned alive?  But God's plan was better.   Of course God could have prevented them from being tossed in like kindling wood, but He had a higher purpose.  He allowed them get thrown into the fire so that His glory would be revealed even more so had He simply prevented the fire toss from the beginning.  Once they realized they weren't burning to death, I can picture them saying, "Hey Nebs!  How do you like our God now??!!"  The king was so in awe that he finally acknowledged the power of their God.  He even made a decree that said anybody who talks trash against the God of the Jews is considered an act of war.  Then he gave them promotions to their positions over the province of Babylon.  I'm pretty sure that would not have happened if they skipped the bonfire.

It has made me realize that during my trials, when I don't get delivered from heartache, pain, or suffering that maybe, just maybe, it's because God has something bigger in store.  I think back on the Nepal closure and I can't help but wonder if that wasn't part of His plan from the very beginning.  When I started this journey I wasn't open to an older child or a special needs child.  Not. At. All.  But, through that awful heartbreak He sustained me.  And better yet, He changed my heart.  He taught me that it's not about my "wants;" it's about a child who needs a family.  A child who needs a mother's love.  A child who will know that her mom will be like a pitbull to protect her.  I never, ever, ever thought I would ever get to a place where I could say that I was thankful for the closure of Nepal.  And yet, here I am.  Thankful because if that wouldn't have happened, my heart wouldn't have changed, and one very beautiful, sweet, precious little girl might still be waiting for a family.

Although deliverance is awesome, I'm not knocking sustainment.  And for that reason, I'm going to keep praying that He will sustain me through the rest of this journey.  I can't WAIT to see Him glorified when her two little feet step off of the plane and into the USA.
Posted by Kristen at 8:14 PM