Munni had her EEG yesterday and for the most part, she took it in great stride 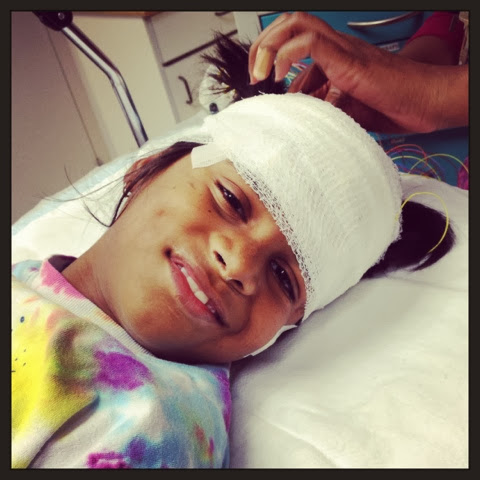 The strobe light portion of the test did not bother her at all but when it came to the blowing on the pinwheel, the wheels fell off the wagon :(  I felt so sad for her. Since her lungs are already somewhat compromised, I figured this would be the portion of the test that would cause anxiety and it did.  They try to force hyperventilation.  She was labored in breathing when she had her seizure so I'm not surprised that this caused trepidation for her.  She started to cry and stopped blowing the pinwheel and freaked out a bit.  The nurse tried to get her to respond to some of her questions but Munni wasn't having any of it.  She was upset, scared, clinging to my hand and it took a while to calm her down.
Afterwards, I took her to buy new socks (that's what she wanted!) and candy.  She picked out her favorite - Tootsie Rolls.  On the way home from the store with Tootsie Rolls in hand, she told me, "Mommy, I can't stop eating this candy!  I don't know what it is!"  She cracks me up :)

We also finally got her surgery/MRI scheduled for December 4th.  The scheduling people were awesome and able to get it scheduled for early in the morning so I won't have to deprive her of any food.  This is a huge bonus for adoptive kiddos and a major answered prayer.  In regards to the EEG, I won't get the results for 7-10 days.   I don't know how long after for the MRI but then we will have a follow up and hopefully it will all be good news.  I would appreciate any prayers for Munni!

On another note, my furnace went out and I had to replace it to the tune of close to $6k.  This all happened right around the time my final installment was due for the first half of my payment to my agency.  Let me pause for a moment and tell you that if you ever want to be tested and tried and have the most unexpected costs and repairs happen to you, start an adoption :)  Throughout this journey there have been times when I've felt God tell me to cry out for help and times when I've felt him tell me to pray in secret.  This was one of those times when I felt like he was telling me to just pull into his presence and trust in him and pray in secret.  The deadline for the payment to my agency came and went and I didn't have the money.  With everything else going on in regards to Munni, I didn't have enough energy to stress over it.  I just kept praying.
Last October I had major issues with my transmission and it turned out that Nissan was involved in a class action lawsuit because they installed the faulty radiator that leaked into the transmission of the Xterras and never issued a recall even though they knew.  Those dirty dogs.  The problem didn't kick in until around the 90k mark so I think they thought they would get away with it…. I guess they weren't banking on the fact that a lot of Nissan buyers (like me) bought with the intention of keeping the car for a lonnnnnnnnng time.  Let me tell you, I LOVED my Xterra.  It was my favorite car I ever had.  So when all those problems arose I was highly ticked and even more so when the dealership wouldn't do anything.  Well, I was contacted about the lawsuit, filled out the paperwork, and forgot about it.
When we got home from the EEG, I grabbed the mail and we walked into the house.  In the mail was a check from Nissan.  Yep.  I couldn't believe it.  It was enough to cover my final payment for the agency fees and my immigration fees!  God is so very good :)  Of all days, that was the day I needed a miracle the most.  Time and time again, God has provided.  He has shown his favor and providence and proven to me over and over what is etched on my arm, "Is anything too hard for the Lord?"  That verse was a cornerstone for me for Munni's adoption and continues to be one for R's as well.

I am now waiting on my finalized home study so I can send it to be apostilled and then my dossier will be shipped to India.  I should have it by the end of next week, maybe even the beginning.  My caseworker thought I would have to wait because of Munni's birth certificate (they estimated that it wouldn't come in until the end of December!) so now that I have everything, it's all good to go!  I learned that R's orphanage is thrilled to know that she will have an Indian sister :) They know that I had to update some paperwork since I was only issued guardianship in India instead of full and final adoption.  They are working on her CSR so that it's ready to go once my dossier arrives in India.  Here comes the next miracle making moment…. That is when her referral fee will be due which is $7, 925.  That also includes the humanitarian fee that goes to India.  After that, the *only* thing I have to pay is travel.  I know travel is expensive but I will have some time to save up for that.  I'm planning on spending some time over Thanksgiving break filling out the 3 possible grants for singles and brainstorming :)

So that's where we are.  I look at her and think about all that she's faced and accomplished since she came home and I am amazed by her.  Oh, and did I mention that she got straight As on her first report card with no accommodations?  I was really proud of her because she tries hard and wants to learn.  I purposely did not put her in an ESL class.  My thesis for my Masters degree was in second language acquisition so I have very strong thoughts on the topic :)  She is doing great and learning in leaps and bounds.  I thought she would be learning Spanish as her third language but instead she's learning sign!  She had a hearing impaired friend in Hyderabad who was like a little sister to her and now in her class is a boy who is hearing impaired.  She has learned so much sign I am in awe!  One day after school I was picking her up from the center and the two of them were on the playground.  She was holding his hand and they were signing something.  I wanted to cry -  It was the sweetest thing.

Thank you for all your prayers for Sweet Munni, I appreciate them so much!!
Posted by Kristen at 8:54 PM