I took this big turkey in yesterday morning at 8 am.

He was so scared :(  When they put him in the cage, he was shaking and at first, wouldn't give me a kiss goodbye.  BUT, I managed to get one before I left.  A big, sloppy, soft Simon kiss.
And then I cried the whole way home.
It was a nerve wracking time waiting for the vet to call.  I was praying that I wouldn't get the call that he had bled out.
In order to pass the time, I called Mer.  I kept thinking I would be all non-chalant on the phone, like I wasn't worried or anything.  Until I heard her voice.  And then the lump in my throat turned into these pip squeak noises, 3 octaves higher than my normal voice.  See, Mer loves Simon too.  And he gave her ALL kinds of kisses when she came to Ohio back in March.  She is also a dog person so I didn't have to explain anything, she just gets it.
In order to distract me we decided to do some online screen sharing of our photography stuff :)  We were in a deep conversation about aperture/shutter/exposure and composition when I got *the call*  and like a great friend, she waited on the other line the whole time I talked to them :)
Everything other people and I had been praying for Simon, was answered!
1)  The vet thinks he got the entire tumor out.  YEAH!!!!!!!!!!
2)  The surgery was easier and shorter than he anticipated.  YIPPEEEEEE!!!!!!!!
3)  Simon bled, but not a lot !  WOOOO HOOOOOOO!!!!!!!!!!!
4)  Simon *appeared* to not be in any pain when I picked him up!  DOUBLE YEAH!!!!!!!!!!!!

When I was walking out the door to go get him, my sister called me to check in on the situation.  The floodgates opened again :)  Even though I knew that he was o.k., I think the stress of the whole situation was just pouring out of me.  One thing you should know about my sister- she was very anti-dog for a long time.  She wasn't always like that though since growing up in our house we had a lot of pets.  But then she got married to a non-pet person and he won her over to the dark side.
Until Barkley came along.
He won her heart.
And that made room for Simon :)
So she was concerned for him and me and the whole situation.  So much so that she was going to postpone her trip to Atlanta so that she could go to the vet with me.  Sisterly love :)

He got to wear this beautiful, full leg, wrap :)
They tried to put an e-collar on him, but he wasn't havin' it.  When I went back to the cage to get him, he had already taken it off.  The vet tech tried to put it on him again and he was so violent about getting it off his head that I told her to just leave it.  It would have caused more damage to his leg. 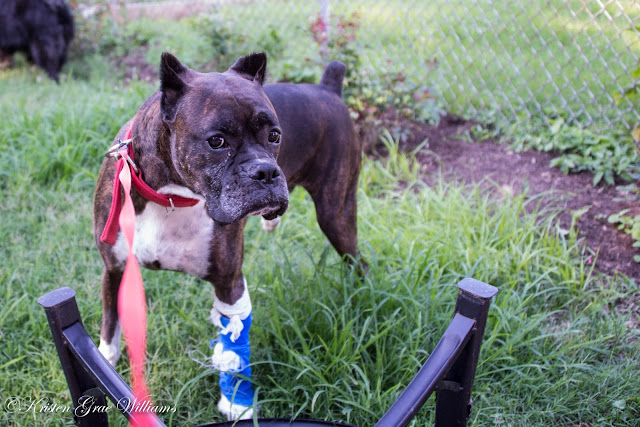 Ahhh, relieving himself.  You can see in his face that he doesn't feel good.  And he started to tear at the bandage.
After his potty break, he went right to bed and took a huge nap.  He is spoiled :)

He was pretty good yesterday about not messing with his wrapping but this morning, I woke up to a tangled mess, so I had to take it off.  When I finally got all of it removed, he licked his ankle a ton, but not the wound so I think it was too tight. 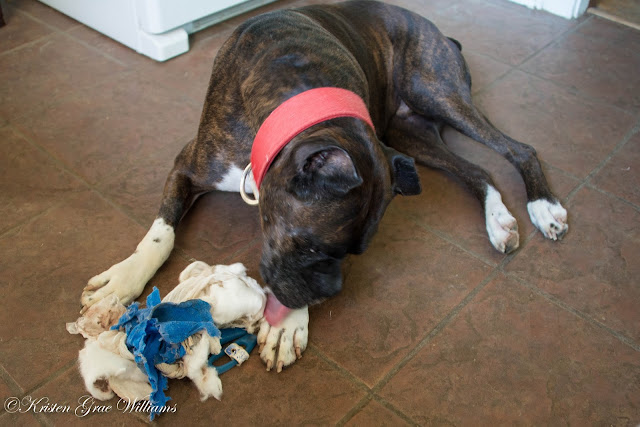 The vet sent him home with antibiotics and a ton of pain medication for which I was very happy.  He goes back on Monday for a check up and then two weeks later for suture removal.

The type of tumor he has is supposed to be cancer but a non-spreading kind.  It's a spindle cell tumor but until the path report comes back, we won't know if it's a slow grower (most common) or an aggressive grower.

The vet told me what a surgical center recommended for treatment which in my opinion was all kinds of crazy.  They suggest radiation and if it grows back more than once, amputation.  I'm not down with that.  When it comes to pets, I'm a quality of life believer vs. quantity of life.  I told the vet that I will never amputate Simon's leg.  My family learned the hard way with our Irish Setter, Shane.  The vet pressured us into amputating his front leg (he was a 100 lb dog) assuring us that it would save his life and that he would do just fine.  We weren't sure and under extreme emotional duress and in retrospect, feel that he took advantage of that.  Anyway, a week after Shane's amputation, it turned out he had bone cancer.  We put him down to put him out of his misery of the pain and struggle of not being able to walk.  That was a horrible experience for us because we felt like we tortured our dog.  Anyway, because of that, I feel very strongly about preserving Simon and all of my pets' quality of life- even if that means I have to say goodbye sooner than I would like.

Seeing Simon back to his old self this morning, was such a relief.  He brings me so much joy :) 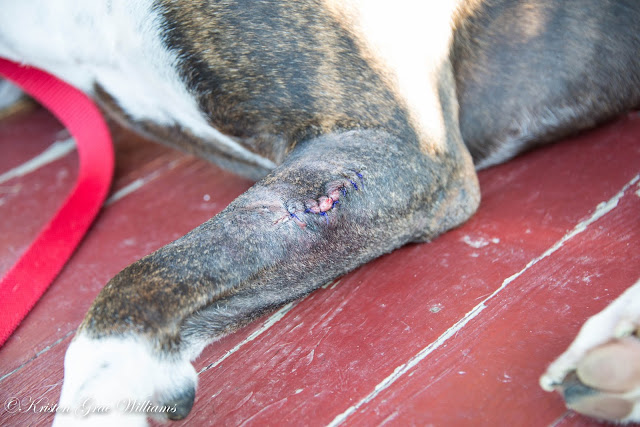 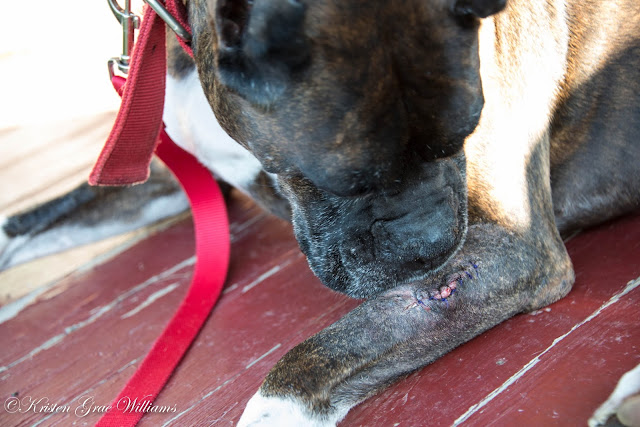 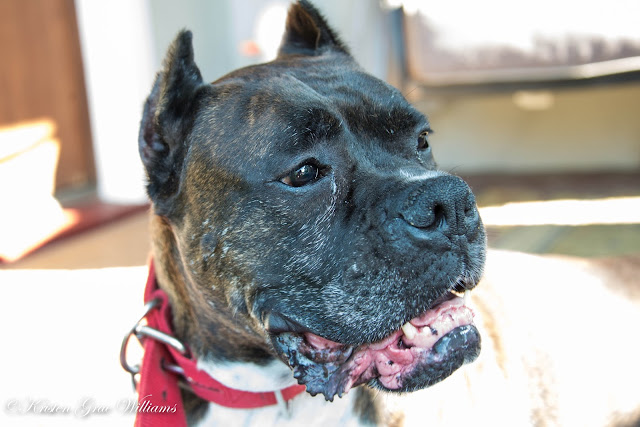 He's got his sparkle back :) 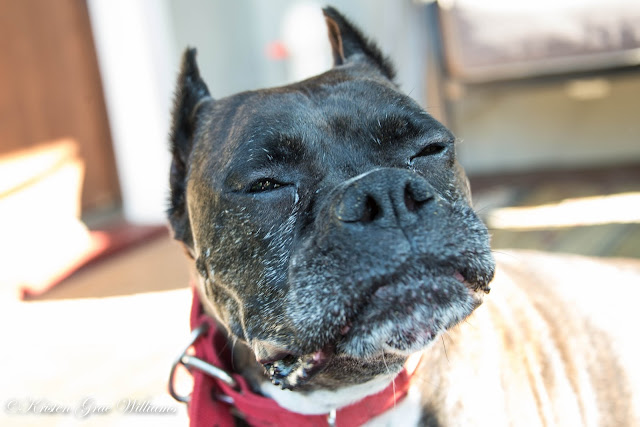 It's expressions like this one that make me laugh! 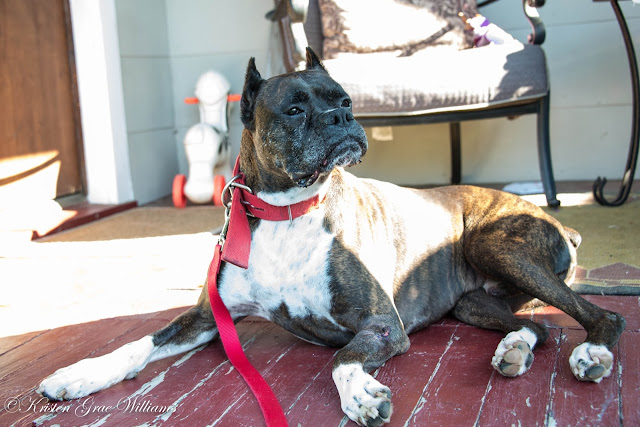 Thank you for all the prayers for my sweet, funny, loving Simon!!