One of the most thought provoking days I had in Munni's country was the day we went to the Taj.
It was a 5 hour car ride filled with the sights, smells, and sounds of India.
India has a very distinct smell of campfire, dirt, and spice that I would recognize anywhere.
The things I saw that day made a deep impression in my memory.

I saw...
Groups of families living under a bridge in the busy intersection, making food over a fire while the rest of the world went on its way.
Little girls smaller than Munni, weaving between cars begging for food. or money. or something that will bring their "overseer" profit.
Men peeing everywhere.  Men in suits and men in rags.  It makes no difference.
A motorcycle passes by with a man in front, a woman behind, a baby on her hip and two toddlers between them.
We slow down to weave around the herd of sheep, with no shepherd, as they make their way somewhere.
There are no lanes or traffic signs and it appears there is no rhyme or reason for how this all works but somehow, everyone understands this organized chaos.
Off in the field is an abandoned, half-built structure.  Boys are playing a game of pick-up cricket.  I smile and think of the basketball courts and baseball fields back home.
A man on the side of the road with a basket.  He knocks off the lid and out pops a cobra.  I recoil.
I think he may have gotten bit, but he goes about his business charming the serpent with his pungi.
A dog hobbling along on three legs.  The fourth looks mangled.
A black, stinky, stream of sewage runs along the side of the road.  People walk around it, over it, and through it.
A man, dirty and aged by weather, stands next to a wooden cart filled with colorful fruit, many of which I don't recognize.
Abandoned tires are formed into modern art structures.
Trash and debris are everywhere.
I look off into the field and see random people walking here and there.
A man stops where he is, squats down, and poops.
Another dog on three legs.  This time it looks like an infection.
Off in the fields, another game of pick-up cricket.  The boys are wearing rags and smiles.
Car horns fill my ears.  They are used for navigation, not anger.
A rickshaw on my left slowly makes its way.
The farther out in the country we get, the dirtier the clothes.
Saris aren't as colorful, dulled by wind and dirt and washing by hand.
Several toddlers with no pants on, chase a rooster around.  Their faces are full of joy.
A man showering himself on the side of the road.  I'm glad he's wearing boxers.
A huge ox is pulling a cart stacked tall with some kind of long grass.  An old man sits at the front of the cart with a long stick to keep the beast moving.
A pack of dogs, all but one are running on three legs.
Another motorcycle whizzes by with a family of four.  The mom wears a full burka.
A baby is alone, trying to go down a set of stairs of an abandoned building.  Where is his mom?
Another game of cricket is passing time for some young boys.
A dog lies in a ditch on the side of the road, bloated with death.
Off in the distance is a huge Krishna statue.
Its colorful and frightening stance commands attention.
Several cows with their hip bones protruding, wander across the street.
We come to a stop and a monkey jumps on our car.
Its teeth are bared as it performs tricks for money.
Munni and I look at each other and the monkey jumps off and runs to the next car.
A man with no legs and a tangled mess for arms, scoots his way among the cars.
I wonder what happened to him and how has he survived this long?
I notice that the children are smiling and laughing.  The adults are frowning with looks of despair in their eyes.
A woman washing clothes on the side of the road.  Her baby, wearing no diaper, is sitting in the dirt playing with a stick.
Off to the right, another man is squatting in the field.
A dead dog on the side of the road, its neck in an unnatural position.
A motorcycle "gang" goes by and they are all wearing bandanas across their faces.  They look like bandits but instead are shielding their lungs from the pollution.
A mother sits on an old tire, breastfeeding her infant.  Her face is vacant.

Finally, we arrive at the Taj.  The guide hops in the car and "preps" me for the beggars who will attack me when we get out of the car.  He tells me that he knows that white people want to give them money but it only makes it worse.  This makes me so sad.  We get out of the car and instantly are engulfed by a mass of children and disabled adults.  All I can see are open hands.  The guide turns to what appears to be a 2 year old boy.  He asks where his mommy is and tells him to go away.  I am holding Munni's hand and she is staring at the boy.  I wonder what she is thinking.  Does she have memories like these?
We get in the camel drawn carriage since everything has to be "green" once you are inside the Taj compound.  It smells of urine.  We arrive at the official gate and the guide stands in line to get our tickets.  He is back in a few minutes and we walk to the entrance.  It is Sunday so it is very crowded.  We all huddle through the archway and as we walk through the other side, there is it.
In all its glory.
Majestic, Stunning, Shimmering, Peaceful.
There is an immediate sense of calm when you see it.
Even the birds seem to sense this as it appears they are flying in slow motion, circling this beautiful homage of love.
It truly took my breath away. 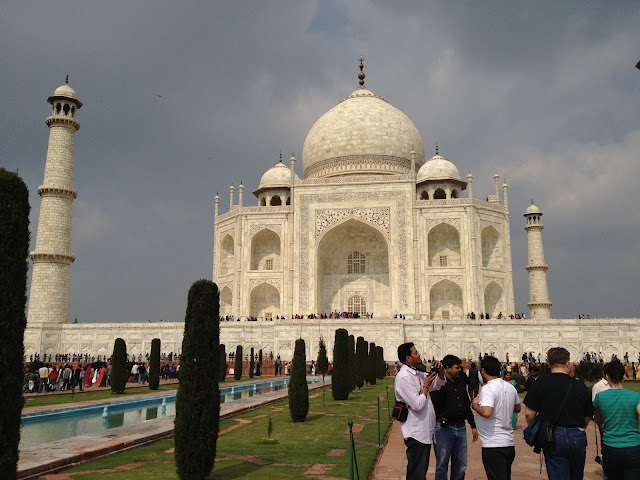 **My camera was in my carry-on that was stolen at the DFW airport on our way home :(  I only have my iphone pics...