Lost files, airing out my laundry and a dog rescue

Last week my caseworker informed me that they lost misplaced my file.  Somehow, the Embassy in Delhi didn't receive it.  My letter from the Bureau of Consular Affairs was dated June 26th.  I should have had my Article 5 by now.  Luckily, my caseworker is on it and emailed them my approved I-800 and copies of all the other paperwork I had to fill out.  Supposedly they are trying to figure out where my file is- somewhere between New Hampshire and New Delhi.  There was a slight moment during all of this when I thought of the movie Zoolander....


Anyway, to appease my frustration and in the spirit of staying positive, I decided to work on some summer projects.  The first is homemade laundry detergent.  I've been waiting for my supply to run out so that I could finally try it!  I've been interested in this for awhile and have been doing tons of research on it.  I finally came up with a recipe I thought would work for me and then I ordered all of my goodies off of Amazon.  It's very, very basic.


First off, I used 1 cup of Borax and 1 cup of Arm & Hammer Washing Soda 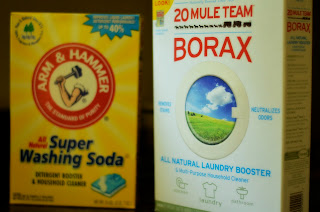 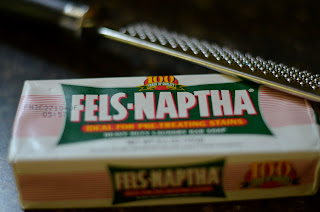 And I also grated 1/2 a bar of Goat's Milk Soap because I'm obsessed with it!  The recipe I found calls for 1 bar grated soap, but I chose to do half of each. 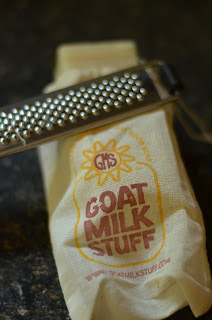 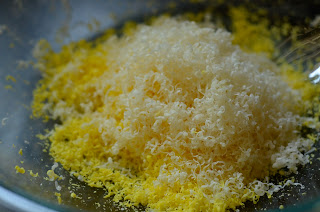 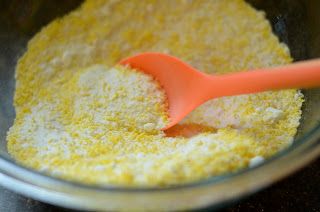 Then, I poured it in one of my old coffee containers to keep it fresh 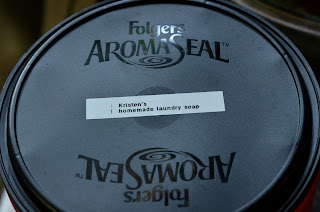 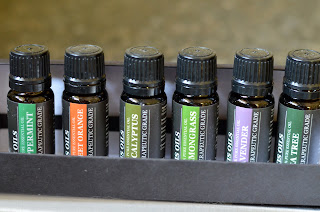 These babies are SUPER concentrated so it only take 3-4 drops PER LOAD and man do my clothes smell amazing!!!

A couple of things that are different with this recipe compared to store bought detergent:  first of all you only use 1 TBS per load.  If your clothes are really dirty, then use 2 but even then its less than half those scoops that come with the detergent.  Secondly, the water won't suds up the way commercial brands do BUT that doesn't mean your clothes aren't getting clean!  My clothes not only smelled great from the essential oils, but they looked great too!

I bought everything except the goat's milk soap off of Amazon.  The essential oils were the most expensive at $23 but they will last me years!  Be sure to keep them in a dark place to extend their longevity.  I've also been combining the essential oils with a cup of white vinegar for homemade fabric softener.  I bought the goat's milk off of Etsy and that was $6.  My total cost was $54.  The batch I made yields 32 oz.  I have no idea how many TBS are in 32 ounces but I know it's a lot :)  And I still have tons of the Borax and Washing Soda left.  After I make my next batch, which I'm assuming will be in a couple of months, all I will need to buy are the bars of soap.  Again, I didn't have to splurge on the Goat's Milk soap but I did.

My next project came as a surprise.  I am a DOG LOVER.  You probably couldn't tell.  I love everything about them and even though I've cleaned up tons of poop and vomit, lost countless shoes, my Ray Bans, and my passport to chew fests, uncovered $28 in Simon's poop in my backyard, I wouldn't trade them for the world.  There is just something about a dog's love that is, well, unconditional.

So when I find out about a dog being abused or is suffering, my b*tch switch flips on and I go all Jason Bourne.  Last Friday, my good friend Jen and I completed Mission: Boxer Rescue.  I found out about this sweet guy from a website I subscribe to and something about his face just broke my heart.  Turns out he is an AKC pup and his previous owner was using him for breeding purposes. 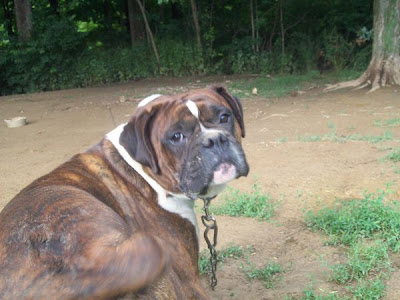 If you look closely, you can see the blur by where is little nub is wagging like crazy.  This doggy has spent his life on a chain.  He has NEVER been off of that chain since he left his mama.  When my friend and I finally arrived at the house, we were so far out in the country I was a little nervous that we would be reenacting a scene from Deliverance.  When we went around the back of the house, my heart broke.  There was this guy up front, staked to the ground.  Then behind him were as far as I could count at least 10 other female dogs who were also chained.  There was some sort of structure so we couldn't see behind it but we could hear dogs barking.  It seriously looked like a scene from when they raid dog fighting kennels.  They only had these tiny plastic dog houses that looked like kitty litter covers.  Jen started the Spanish Inquisition while I tried to get him to come close to me.  When he finally approached me, he cowered so low he was crawling on the ground.  Jen found out that they never leave their chains- they are there through wind, storms, oppressive heat, freezing cold, snow and ice.  It truly was heart-breaking.  Jen also saw that when the owner approached him, he cowered very low.  It's one thing to cower to me, a stranger, but another to cower to the owner who feeds him every day.  She has a new Euro male she is going to breed so she doesn't have any use for this guy anymore.  When we finally got him off of the chain, he was so timid walking.  It took both of us to lift him into the car because he wasn't havin' it.  The poor guy was so scared. 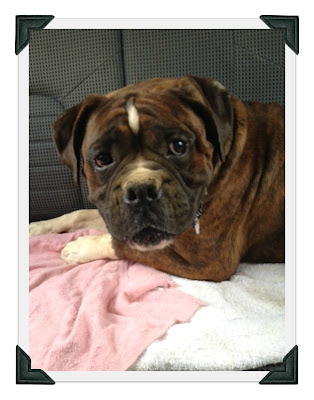 He was so nervous that he got off of the seat and wedged himself on the floorboards between the back seat and the passenger seat.  If he could have made himself disappear, he would have.

I've been working with him, trying to help him regain his confidence and to understand his freedom off of the chain.  He is now feeling comfortable in my house and the back yard.  The first day I scrubbed him down 4 times to get all of the dirt and grime off of him.  The look he gave me when I was scrubbing behind his ears was so sad.  You could tell that no one had ever done that.  After the bath he was like a magnet to me!  Simon was so cute with him.  There are 4 steps from my kitchen to the landing to go out the back door.  All the dogs ran out but he just stood at the top, looking down and panting.  Simon ran back in, nosed him, and then ran back outside.  This scenario repeated itself 4 times until finally he followed Simon out the door.  He was completely exhausted after this and actually was falling asleep sitting up.  Poor fellow! 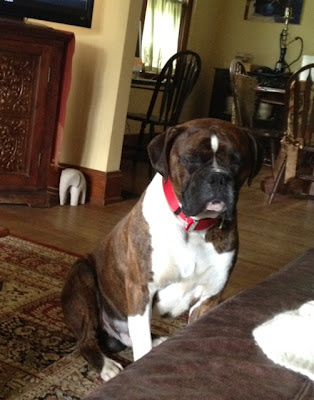 He still has a LONG way to go before he is a normal dog.  I took him to my mom's and my sister and I were using positive reinforcement  to help him acclimate to the new surroundings.  He's not food motivated at all, only affection motivated.  It makes complete and total sense.  The one thing that was withheld from him is what he craves the most.

Tonight he is at the vet getting neutered.  It was a production leaving through the front door.  He is comfortable with the back door and inside the house, but trying to get him to leave through the front door and to walk down the stone pathway and steps brought him right back to how fearful he was when he was first taken off of the chain. 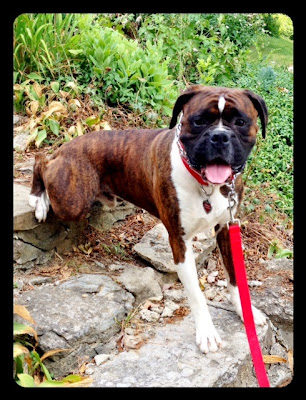 You can see that he won't let his back legs off of that step!  I felt bad because he was panting very heavily.  We took it very slow (25 minutes from the door to the car!) and I praised him with every step he took.

I can't wait to pick him up tomorrow.  It's very easy for me to love on him and to help him.  There is something about dogs that just come naturally to me so it is completely joyful for me to be able to help this sweet guy.

My sister came up with a new name for him and I think it is most fitting.  It is one that I can already tell he will do justice.  So, introducing.... 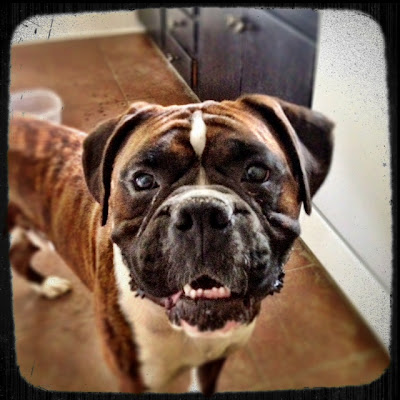 I'm so excited to see the transformation in this love bug!!  If you know of a dog that is living its' life on a chain and you are not sure what to do, PLEASE contact Dogs Deserve Better.  They can help.  You can do this anonymously in the event that you don't want to cause problems with someone you know.  The psychological damage a dog endures living on a chain is devastating and no dog deserves that.