Yesterday my caseworker sent me an email telling me that she put a status check into the Embassy about my case.  She said she won't know anything until Monday, if there is anything to know.

But just about 5 minutes ago my boxer, Simon, started sniffing at the front door.  He only does that if someone is there or the cat wants in.  So I opened the door and there was the mailwoman!  She had a letter from the Bureau of Consular Affairs.  It was dated June 26, 2012 and told me that my petition has been forwarded to the visa issuing post where my adoption interview will take place in New Delhi.  So another Indian adoptive mom and I figured out based on her timeline, that I should receive my Article 5 next week!!  What that means is that I will get the notice saying the Embassy has approved and issued the Article 5 and sent it CARA.  And here's where my forever hopeful side is hoping against hope that I will receive my NOC 15 days after that notice :)  Nothing wrong with being hopeful?  I do realize that it is more unlikely that the 15 day timeline won't be adhered to but I'm still praying for a miracle!!

And what's even more fitting is that I just finished M.'s photo book!!  I can't even begin to tell you what an overwhelming experience that was.  I don't think I fully grasped the magnitude of it until I sat down and tried to write the first page introducing myself.  It was very awkward.  I have SO MUCH love for this little girl and have been praying for her since last year.  But she is just barely finding out about me so it's a gentle line of trying to express how much I love her but also not freaking her out!  I also put a lot of pressure on myself because she will have this book for THE REST OF HER LIFE. Yeah.  And then there are the guidelines....I want to say enough without saying too much.  I also picture her looking at this book over and over until I get there, so I wanted it to be VERY special.  I am so pleased with the way it turned it out!  I cried several times while making it but it was a good cry.  At the end I wrote her a little letter.  Again, I didn't want to overwhelm her but I also want her to be excited about starting her new life with me and all that we are going to do.  Here's a picture of the cover.  Obviously in real life her name and face aren't blocked out! 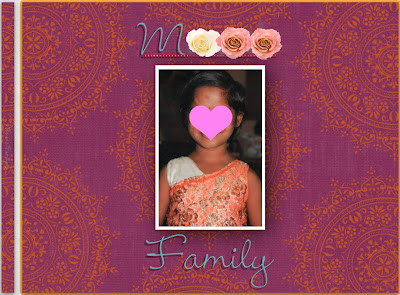 Also, way back in 1997 I stumbled upon the cutest stuffed elephant.  There was something about it that I just loved.  I wanted to buy it for my future daughter but at the time I wasn't even close to becoming a mom.  I left the store but when I got to my car, my gut was telling me to go back and buy it.  I've kept it in the same bag, all wrapped up, ready for my little girl.  I took of picture of it and on the very last page of her book, I put the picture and told her how special this elephant is.  I told her that I have been saving it for a very long time and that when I finally get to go to India to get her, this will be the very first present I ever give her.

Lastly, I got some new ink :)  I've been wanting this for two years and now that things have really been moving forward, I committed.  By now, you know I have a thing for elephants.  My house is full of them from all the places I've traveled. 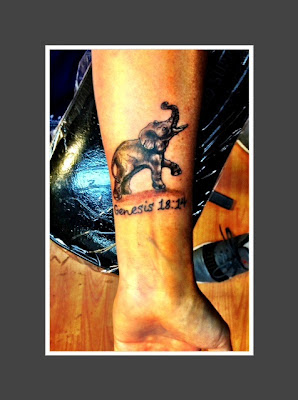 It's only fitting, I mean, she is from the land of elephants and the Lord has shown me that nothing is too hard for him to accomplish!