Barkley has been living unchained for one week today.  Every day he is making progress and it's awesome to see this sweet puppy dog's personality coming out more and more each day.  He's had a lot of firsts this week, some scary and some not so scary:

He had his first car ride (SCARY), his first bath (LOVED), his first toy (LOVE, LOVE), his first taste of peanut butter (BEYOND LOVE!!), his first comfy bed to sleep on (LOVE), his first time running freely (LOVE), first experience with cats (NOT SURE), with the vacuum cleaner (SCARY), the doorbell, (KINDA SCARY- why's everyone barking?), hairdryer (SCARY), long walk on a leash (KINDA SCARY), and many more.  Simon, Rollie, and Lola have been really great showing him the ropes.  There were some issues of dominance with Simon and Barkley involving two things:  me and the squeaky toy.  Once Barkley was neutered however, the competition has faded.  Also, he hasn't had one single accident in the house!

It's a powerful experience to watch this dog trying so hard to overcome his fear.  He has made great strides within the house and the backyard.  But when he is in a new environment or I ask him to do something new, he reverts right back to the fearful dog he was a week ago when he was first unchained.  It's difficult to see how much fear he has but in spite of that, you can really see him trying.  When he gets in these states of being, he starts puffing out his jowls and he gets these two r-e-a-l-l-y long drool hangers from each side of his mouth.  They never drop on the floor but they've gotten at least 10 inches in length!  You can see from the videos I posted below just how hard it is for him to step out of his comfort zone.  These were taken on Monday, the day I dropped him off at the vet to be neutered.  I finally figured that maybe if I'm out of sight, it will encourage him to come to me.  I ended up going out on the front porch, out of his line of vision.  Watch for a super cute Barkley move around the 1:00 mark:
In the next video, you can really see him moving WAY outside his comfort zone.  His eyes are darting all around and the wrinkles on his forehead are all scrunched up with worry:
I was so proud of him!  I know that was really challenging for him!

I picked him up the next day from the vet and boy was he happy to see me!  He didn't like the car ride home though and burrowed himself on the floorboards in the back seat.  Poor Barkley :( 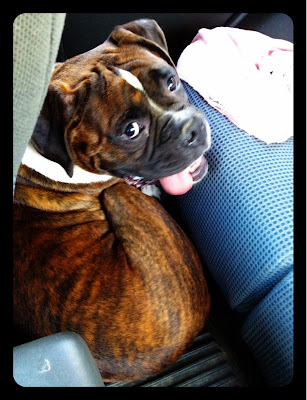 The first night home after the vet, he slept on the fleecy bed I have for him at the end of my bed.  The next morning, one of my feet was sticking out from under the covers and I awoke to the softest little Barkley kisses on my toes!  When I went into the living room, this is what I found.  Apparently during the night, he took it upon himself to explore the toy basket! 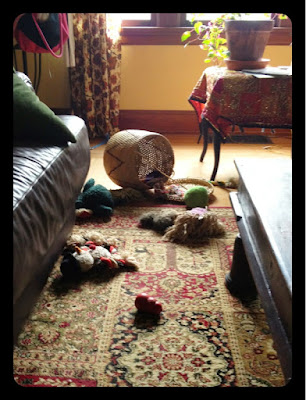 Wednesday night there was a terrible thunderstorm in our area.  The kind of storm that when it thunders, you are literally waiting for your journey to the center of the earth because it feels like the planet is going to split in half.  I was so sad for Barkley.  I kept thinking about all of the storms he lived through on that chain and how terrified he must have been.  He had a really tough time with the storm even though he was inside.  He would not leave my side and was panting so heavily.  When it was time to go to bed, he noticed that Simon was ON my bed so he thought he should be too.  They are both sacked out and snoring! 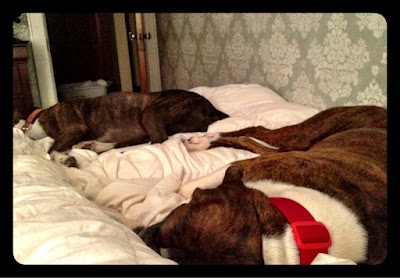 Last night we went for a walk for the first time.  Since he has such trepidation with the front door (every time so far, the front door has meant a ride in the car = SCARY) I decided that group therapy would be best.  I always walk my other 3 dogs all at the same time so last night I added one more into the mix.  He did a really great job!  He still struggles with cars though as they are SCARY.  At first he would freeze every time a car passed us.  As we progressed on our walk, I coaxed him through each car passing and made him keep walking with the rest of the gang.  I wanted him to see that when we walk, he is safe from cars.  Simon, Rollie, and Lola are excellent leash walkers- we've got our system down- so I think it was easy for Barkley to fall in line and see what they were doing and copy it.  The pack mentality is so strong!

This morning, I woke to this: 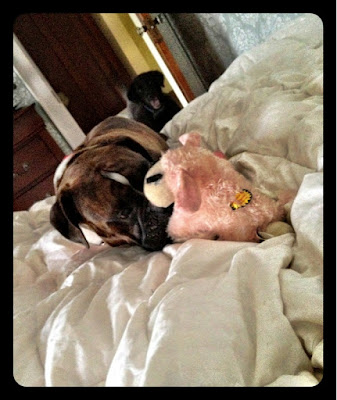 He LOVES his squeaky lamb toy.  Me?  not so much early in the morning...

Each day more and more of his personality is coming out and it's really fun to have two wiggly boxer butts in the house.  They have a sense of joy that is just different from other dogs.  You can't help but laugh when you see them do their boxer wiggle dance and kidney bean move!

I'm excited to see the progress he makes in this coming week.  I've been working on getting him to learn his name and other basic commands like sit, down, and stay.  Thank goodness I took my other dogs to the K-9 Academy.  Even though it was expensive at the time (I took Rollie and Lola) it's paid off because I've been able to use what I learned with Simon and now Mr. Barkley.

As you can see from the photo below, for Barkley, life just keeps getting better! 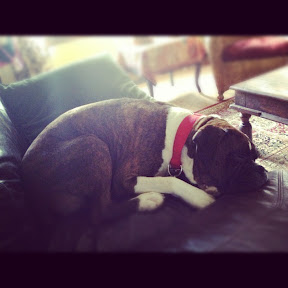