By time I got to the hotel in Hyderabad Wednesday night the 13th, it was pretty late.  M had left me a message at the front desk telling me that we would be leaving for the orphanage at 10:00!!!!!  WOOOO HOOOOO!!!!!  I was SO excited!  Thankfully, my dr. prescribed me a few "relaxing" pills or else I don't think I would have slept that night!    I woke up the next morning feeling great, ate breakfast, and met M in the lobby.  We discussed what would happen and then headed out to the orphanage.  It felt like I was in a dream; I just couldn't believe this day was finally here!!


We pulled up to the gate and stopped at the main office to sign the final paperwork.  We went inside and A, one of the main women who helped immensely with Munni's adoption, was there.  She is a beautiful woman and has such a heart for the kids.   Back in December when we went to court, she was there and I could tell that Munni loved her.  A. told us that Munni's file was still waiting on one signature but that we could go ahead down to the orphanage, get her, and come back.   I was very excited because I was told to expect to wait for hours before I would actually be able to get Munni.

We drove down the long bumpy road where all the dogs were lying amongst the rubble and dust flying everywhere.  It was such a surreal feeling knowing that this would be the last day Munni would spend in this place she has called home for the last three and a half years.  We got out of the car and walked into the orphanage.  I recognized some of the Ayahs and I think they recognized me because they pointed to my "Munni" necklace, smiled, and rattled off a bunch of Telugu.   I gave the ayahs the lovely saris M had made for me.  A tip to all you adoptive mamas out there:  They don't need scented lotions!!!  A few of the ayahs had mentioned to M previously that they keep getting all this lotion that they have no use for, was there anyway they could get saris?  They technically can't ask for anything but I was so thankful M had mentioned this to me the last trip.  Saris cost between $6-$10 depending on the fabric, so I gave M $100 to buy as many as she could.  I am so glad I did that because the looks on their faces were priceless.  These women spend every day with the children, caring and providing for them what they can, so to be able to show my appreciation in a way that was useful to them was so worth it.   I also gave them all the gifts I had brought for the children.

It was finally time for me to get Munni!!!  This time instead of bringing her to the lobby, they brought me back to her room.  I handed the ipad to M to record our reunion.  I was holding back tears, my heart felt like it was coming out of my chest, and I could hardly breathe!  We turned and walked through the doorway and I was immediately surrounded by a sea of smiling faces and laughter :)
And then I saw her.
Standing back away from the crowd in her pretty pink party dress.  We made eye contact and immediately I knew something was off.  I went to her and kneeled down and took her hand and kissed it.  I rubbed her arm and ever so slightly, she pulled it away.  I rubbed her back and again, I don't think anyone would have noticed, but she straightened so that I wouldn't touch her.  Every time I tried to touch her she very discreetly let me know it was not O.K.  In my mind I thought back to the day in December when I had to take her back to the orphanage.  When I went back to her room to say my final goodbye, I could already see it.  Her face had changed.  It was as if the bright, smiling child completely got sucked out of her and was replaced with indignation.  How could I blame her now for not wanting me to be close to her?  I took her to a hotel for 3 days where I loved on her and played with her.  And then I took her back.  It was the first act of betrayal on my part.  I can't even express how frustrating International adoption can be and this by far, is the worst part.  How are you supposed to build a trusting, safe relationship with your child when you have to go through unnecessary procedures such as I did?  The ayahs kept trying to get her to kiss me and I kept telling them it was O.K., please don't make her.  I didn't want her to be uncomfortable and who knows all the thoughts that were racing through her mind.
We stayed in her room for about 15 minutes and then we walked to the lobby.  There was still some business M had to take care of so Munni and I went outside and I took a bunch of pictures of her on the grounds of her orphanage.  I want her to have these pictures so that as she grows and develops her identity,  she has a touchstone to her country.  Things were a little better once we left her room and headed outside.  We walked around and she did hold my hand.  The thing about adopting an older child is that when they do things like that, your heart goes CRAZY with joy but it's such a delicate game of giving just the right reaction to not freak them out or set them off to not want to do it again.  I kissed her hand and she smiled at me.
Finally we were able to go back to the office to get Munni's file.  I signed several documents and it was so fun to date everything for Valentine's Day!!  Munni handed out chocolate to all of the workers in the office.  They loved it!  When we were finished, we stepped out of the office and the local news channel was there.  They asked if they could interview us.  There was going to be a huge conference the next week with C*RA and the agencies discussing the changes and the needed improvements to the entire adoption process in Ind*a.  We agreed and they interviewed me while I held Munni.  I did really great until she asked me if I could believe it was finally all over.  I started crying and told her, "You have no idea!"  Then they zoomed in on my "Munni" necklace and it was over.  I only wish that there was a way we could have gotten a recording of it so Munni could have it later in life.

We got in the car and left.  With a smile on her face, Munni never looked back... 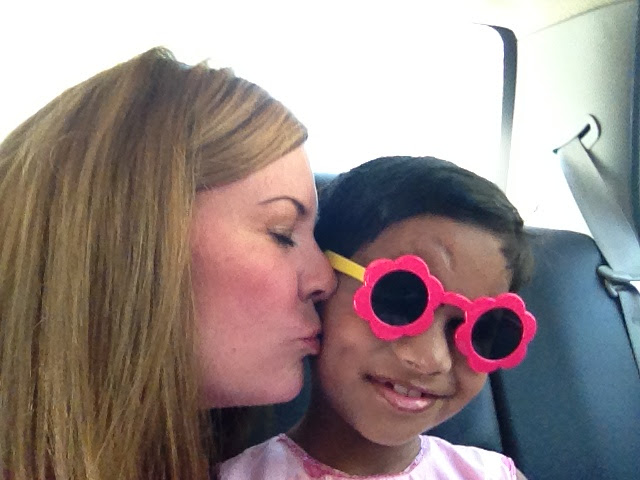 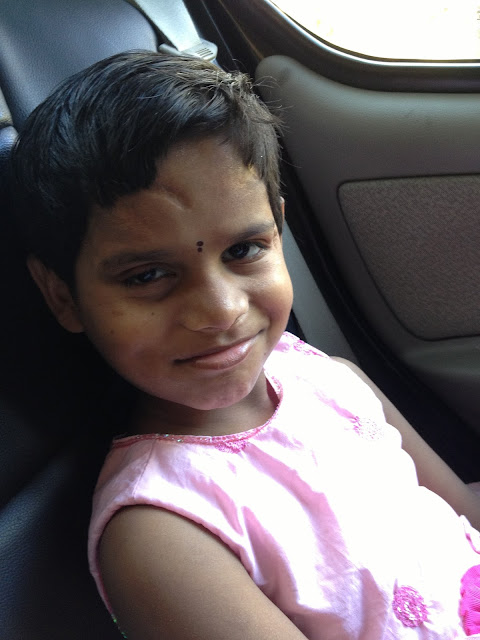